When you ask someone ‘what branches make up the U.S. Armed Forces?’ they’ll typically answer ‘Army, Navy, Air Force, Marines’ but one that they’ll routinely forget is the U.S. Coast Guard. Indeed the Coast Guard is a service branch of the Armed Forces, but it can be overlooked occasionally. However, the U.S. Coast Guard has been in existence since the country’s founding and was championed by a notable Founding Father: Alexander Hamilton. A coastal defense and maritime law enforcement branch was personal for Hamilton, stretching back to his early days in the Caribbean when he worked for a shipping firm. Pirate raids and privateers were a constant nuisance for merchant vessels so creating a service designed specifically for coastal defense and law enforcement at sea was critical. Originally, named the Revenue-Marine, it became the Revenue Cutter Service, and following a merger with the U.S. Life Saving Service under the 1915 Coast Guard Act, the modern U.S. Coast Guard was born. 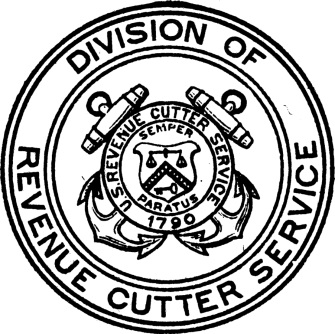 If you’ve read the preceding articles about awards and decorations for the Armed Forces, it was numbered to focus on the Army, Navy, Air Force, and Marines. So why is this post about the Coast Guard labeled ‘special edition’? Concerning awards and medals, the Coast Guard has a special distinction that none of the other service branches can claim: only one Coast Guard service member was awarded the Medal of Honor and no member has received the second-highest medal, the Coast Guard Cross. We’ll go over those in a bit!

Requesting Coast Guard awards and decorations works similarly to the Navy and Marine Corps process outlined in the previous post (Meritorious Service).  The veteran’s Official Military Personnel Folder is reviewed by a technician at the National Personnel Records Center and then forwarded to the service branch personnel center. For the Coast Guard, this would be the Commander, Personnel Service Center in Washington D.C. There is however one important caveat to note with the Coast Guard: records are not cross-checked with lists of ship unit awards or combat actions. The technician only completes a medals request with those awards expressly noted in the service record. If a veteran believes they are entitled to an award that is not listed in their record, that request is forwarded to the service branch for verification.

On October 15 2010, Congress passed Public Law 111-281 establishing the Coast Guard Cross. The newest award was created equivalent to the Navy Cross and is given to service members who perform extraordinary acts of heroism that do not merit the Medal of Honor. The award is meant to acknowledge those distinguishing acts while serving in only a Coast Guard capacity. Despite the award being nearly 10 years old, the Coast Guard Cross has never been awarded. Not even once.

The Coast Guard Cross. The reverse side of the medal reads ‘For Valor’  (image courtesy of the U.S. Army Institute of Heraldry)

Onto the second distinction! During the Second Battle of Matanikau in the Guadalcanal Campaign of World War II, Signalman 1st Class Douglas Albert Munro used his Higgins landing craft to shield Marines that were redeploying under heavy fire from the Japanese. Leading up to the battle, Munro and his shipmate Raymond Evans were stationed at Naval Operating Base Cactus conducting support operations for the Navy and Marine Corps. On September 27, 1942, the Marines were ordered to attack Japanese positions on the Matanikau River and Munro was placed in charge of landing craft and Higgins boats sending Marines to their positions. While ferrying injured Marines back and forth, the Marines at Matanikau faced a counter-offensive and were in danger of being overrun. Munro quickly returned to the beach and laid suppressing fire on the enemy while Marines boarded the landing  craft and waited until all were secure. A couple of the landing crafts became stuck on sandbars near the beach and Munro directed other boats to move in and pick up any remaining Marines. It was at this moment that Munro was shot in the head. Evans held  Munro as he was dying and before he finally died, Munro asked if all the Marines made it out safely and smiled when Evans nodded yes.

News of Munro’s heroism reached back to the United States. Munro was immediately awarded a posthumous Medal of Honor presented to his family at the White House by President Franklin Roosevelt. The citation reads:

“For extraordinary heroism and conspicuous gallantry in action above and beyond the call of duty as Officer-in-Charge of a group of Higgins boats, engaged in the evacuation of a Battalion of Marines trapped by enemy Japanese forces at Point Cruz, Guadalcanal, on September 27, 1942. After making preliminary plans for the evacuation of nearly 500 beleaguered Marines, Munro, under constant risk of his life, daringly led five of his small craft toward the shore. As he closed the beach, he signaled the others to land, and then in order to draw the enemy’s fire and protect the heavily loaded boats, he valiantly placed his craft with its two small guns as a shield between the beachhead and the Japanese. When the perilous task of evacuation was nearly completed, Munro was killed by enemy fire, but his crew, two of whom were wounded, carried on until the last boat had loaded and cleared the beach. By his outstanding leadership, expert planning, and dauntless devotion to duty, he and his courageous comrades undoubtedly saved the lives of many who otherwise would have perished. He gallantly gave up his life in defense of his country.”

Munro’s name has been memorialized in Coast Guard vessels, facilities, monuments, VFW Posts, scholarships, and as of today is the only non-Marine to be listed in the National Museum of the Marine Corps’ Wall of Heroes. Memorial observances are held at the Coast Guard Training Center at Cape May annually with new recruits. 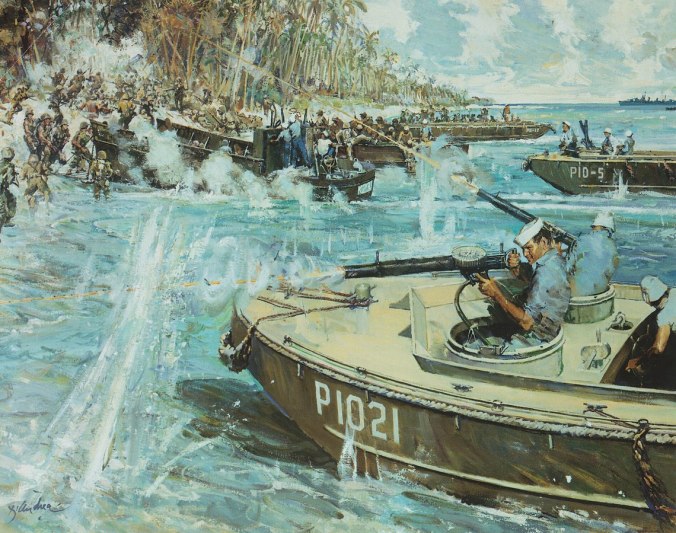 Douglas A. Munro Covers the Withdrawal of the 7th Marines at Guadalcanal, (1989) by Bernard D’Andrea

The U.S. Coast Guard has an incredible history and reading material about the early days of the Revenue-Marine, Revenue Cutter Service, and the U.S. Life Saving Service is extensive. For more information about the Coast Guard and its award and decorations, visit the Coast Guard’s Personnel Services Division.