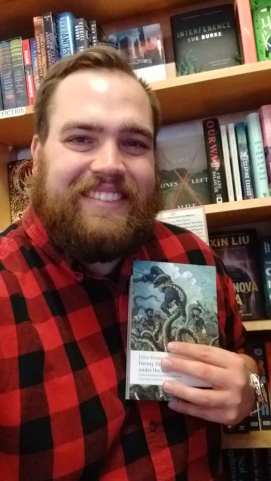 You can always tell a nerd is on vacation when you find them perusing the local, independent bookstore for classics

Thomas Richardson grew up in the shadow of Wilson’s Creek Battlefield, a few miles outside of Springfield, Missouri. There, historical reenactors delivered talks about the history of the Civil War battle. Adopting historical personas (both factual and fictional) they taught the crowds about their weapons, uniforms, and why they were fighting. Thomas developed an intense love for history as a child and spent many years visiting museums, battlefields, archives, and other historic sites.

Thomas received a BA in History from the University of Arkansas and a MA in History with a concentration in Public History from Emporia State University. His master’s thesis focused on the history of Scottish immigration, culture, and heritage practices in the Midwestern United States. He has studied under renowned professors such as Civil War historian Daniel Sutherland and public historians Joyce Thierer and Loren Pennington. In graduate school, he completed an internship at the Eisenhower Presidential Library and Museum where he worked extensively on oral history interviews of World War II veterans. He also worked as a graduate teaching assistant, delivering lectures and assisting students with coursework.

In 2015, Thomas began working for the National Archives and Records Administration and learned a great deal about how the agency safeguards the nation’s historical legacy through preservation and access. He also worked in the National Personnel Records Center by performing reference work on military personnel and medical records. Thomas is dedicated in helping veterans obtain their information and the general public in understanding the historical value of military records.  Were they in a famous battle? Did they serve in a famous regiment or division? What was happening at the time of their service? It’s a privilege not only to safeguard these records, but to serve the veterans who achieved a powerful milestone in life that not all people would take themselves.

“Society changes, but history  never will.  We are the result of all that has occurred and the future stems from our knowledge of the past. Only how we interpret our past, can we understand our present, which prepares us for the future.”