Food is essential to life and civilization. Countless struggles and conflicts can be traced to the availability and access to food, making it an absolute necessity. In war, the logistics required to feed the armed forces was a Herculean effort with impacts resonating from the government down to the local level. During World War I, the rationing of specific food stuffs and commodities were central to helping procure the necessary wartime materials. Unlike World War II however, ration stamps were not distributed, but instead, private individuals and volunteer organizations lead a grassroots campaign to reduce pressure on the national food supply. Here was the rise of some of the country’s first ‘victory gardens.’

Charles Lathrop Pack, a businessman from Michigan, conceived of the idea of how to compensate the loss of manual labor recruited from agriculture while not putting additional pressure on the industry. Food production in Europe had essentially halted with the war and the United States was one of the few remaining industrial agricultural nations capable of the mass-production of foodstuffs. Pack believed that by having people cultivate their own gardens, it would prevent already stressed farms from having to replenish the rapidly decreasing food supply. In March 1917, Pack established the National War Garden Commission which embarked on a national campaign encouraging and educating people on the importance and function of maintaining a wartime garden. The fruits and vegetables they harvested would allow the government to ship more supplies overseas. Simultaneously, federal agencies such as the U.S. Food Administration oversaw the collection, shipment, and distribution of supplies from the United States to Europe. Food Administrator and future U.S. President Herbert Hoover heavily promoted targeted campaigns to help reduce the reliance on foodstuffs sorely needed by the American Expeditionary Force; campaigns like ‘Meatless Meals’ and ‘Wheatless Wednesday’ deterred people from using so they could be donated to the Food Administration.

Coinciding with these food programs, volunteer organizations assisted parts of the agricultural industry to help relieve the stress they endured with much of the labor force now overseas. A regional organization, the Women’s Land Army of America, trained and assigned volunteers to specific farms and ranches to help bolster the workforce. Nominally referred to as ‘farmettes’ volunteers consisted mostly of students, teachers, clerks, and other white collar workers who never worked on farms before. They were trained in agricultural basics and by 1918, they employed over 20,000 women. While not receiving any government assistance, they were supported by members of the Progressive Movement, like Theodore Roosevelt and President Woodrow Wilson and received much of their funding through university non-profits. 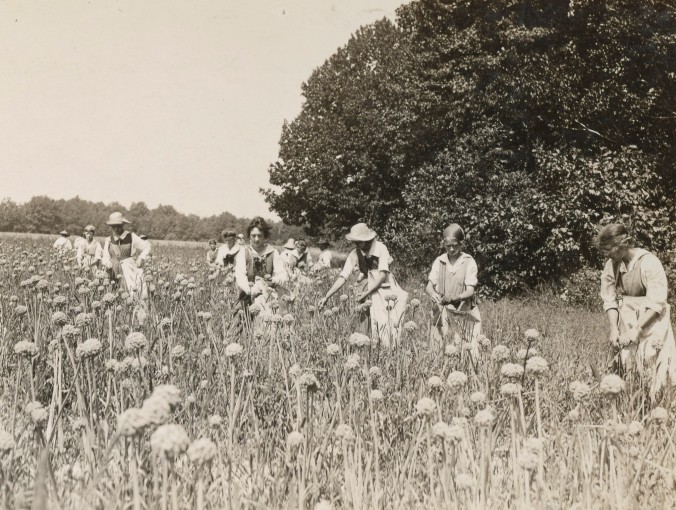 Victory gardens sprang up all over the country and even after the war ended, they remained as community gardens. By the outbreak of World War II, the victory garden practice re-emerged and people again relied on each other to make sure soldiers and neighbors had enough food to win the war.