Tom Wolfe was right. Scott Carpenter indeed had the ‘right stuff’ that NASA was looking for in its first group of astronauts selected for spaceflights in 1959. Three years later, Carpenter is launched into orbit on May 24, 1962 watched by millions of Americans and his family at their home a few miles from the launchpad. ‘For Spacious Skies’ isn’t only about the Aurora 7 mission and the controversial aftermath that shadowed Carpenter since his spaceflight; it’s the story of a man whose lifelong obsession was to fly high, beat all his competitors, and finally get his father’s acceptance.

When reflecting on Carpenter’s life, one could rightly think that he was a man’s man; Ernest Hemingway’s astronaut doppelganger seems the more apt description. Carpenter was an accomplished athlete, deep-sea diver, raised chickens and roosters, skied all over the Rockies, hunted anything in season, made his own bows and arrows, coached swimming teams, commanded U.S. Navy patrol planes, pushed the limits of aviation as a test pilot, smoked a pack of cigarettes a day, and fathered eight children by three different wives. ‘For Spacious Skies’ does its best in showing the sheer bravado of Scott Carpenter the astronaut, but an autobiography doesn’t only draw on the good years. The bad years were themselves filled with heartbreak and abandonment in ways almost equaling the sense of accomplishment upon receiving his Naval Aviator Wings. 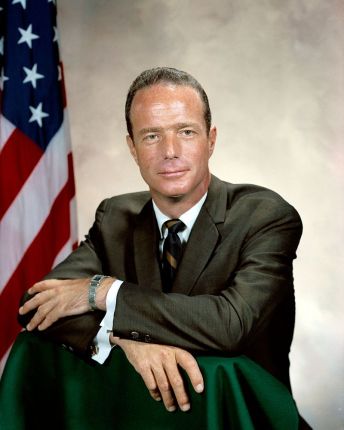 His father Marion Carpenter, largely absent from Scott’s life, spent his professional career in New York City as a research chemist, but his personal habits and dalliances annoyed his in-laws. His mother Florence (known more affectionately as ‘Toye’) spent much of her life recovering from tuberculosis and so raised her son from her makeshift recovery room and eventually the Mesa Vista Sanitarium.  Carpenter’s maternal grandparents were the main paternal fixtures in his childhood. They instilled the hard work ethic and appreciation of the natural world (and the responsibilities of keeping chickens). He learned to shoot, hunt, ride horses, ski, make essential tools, and how to harness all the power of nature. Throughout it all, he craved constantly for his father’s attention and affection. Intermittent letters from Marion and even fewer visits from the East Coast drove his mother Toye to lose her love and respect for the man she married, but Scott always wrote back telling his father of all the accomplishments and wishing for his hopeful recognition in return.

‘For Spacious Skies’ recalls not only Carpenter’s life and military career patrolling the skies with the U.S. Navy, but also the early days of NASA and the global one-upmanship against the Soviet Union. Competing government agencies and service branches were a source of consternation at first, but pioneering engineers on the bleeding edge of aviation technology. The NASA forerunner NACA (National Advisory Committee for Aeronautics) was reformatted into NASA and personnel who’d worked to innovate the next generation of planes and jets were now focused on the stars. Charles Donlan, Max Faget, Hugh Dryden, Bob Gilruth, and others collaborated intensely to choose the best candidates and design the spacecraft to safely launch and return the men back to Earth. Their achievements, setbacks, and long-lasting impact is brilliantly recorded in ‘For Spacious Skies’ and reveal the break-neck speed of innovation and training to jump-start the United States into space.

Halfway through ‘For Spacious Skies’ you feel as though you’re right in the Mercury capsule with Carpenter. The detailed activity, scientific experiments, being the first to eat solid food in zero-gravity, and photographing the spacious skies are just some of the first-hand accounts you experience in the astronaut’s place. The intensity of those four hours in orbit are so accurately portrayed, the immersion replaces the utter anguish one feels when they read about the mechanical malfunction that caused him to miss his re-entry point by over 200 miles. The recorded dialogue between astronaut and ground control adds a dynamic thriller to the grand autobiography. 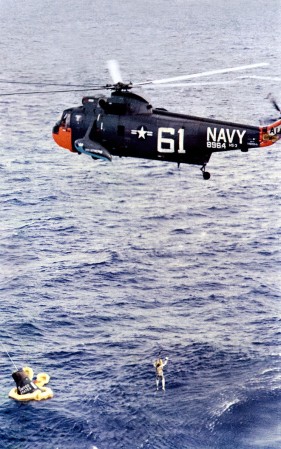 Carpenter being pulled from the water by a Navy helicopter, with the Mercury capsule still floating. Photo courtesy of NASA (May 24, 1962)

Despite the overwhelming evidence that Carpenter brilliantly compensated for what was clearly a mechanical issue out of his realm of control (the pitch horizon scanner malfunctioned causing an over-expenditure of fuel), many people believed he botched his mission. He earned the eternal ire of some NASA scientists and administrators. Christopher Kraft Jr., the Aurora 7 flight director, stated personally that “…Scott Carpenter would never again fly in space.” To the public however, Carpenter’s mission was declared a rousing success; May 29, 1962 was declared ‘Scott Carpenter Day’ as a celebratory parade marched through his hometown of Boulder, Colorado. He, his wife Rene, and four children were received by President John F. Kennedy at the White House, along with the other Mercury Men. Astronauts became instant celebrities as they pushed the boundaries of scientific and human achievement. They accomplished what people believed was just science fiction less than a decade before. But now the world was moving at a break-neck pace in technological innovations, and the Mercury 7 astronauts were right there one the tip of the capsule taking those accomplishments miles above the surface of our Earth.

But the Scott Carpenter story doesn’t end among the stars; it delves below the surface and into the depths of the ocean; or the ‘silent world’ as Jacques Cousteau would have it said when Carpenter attended one of his lectures at MIT. One could argue that ‘For Spacious Skies’ could rightly be called ‘For Spacious Skies and Seas’ (but that doesn’t exactly have the same patriotic flavor as ‘America the Beautiful). The early appreciation of nature inspired Carpenter’s passion for oceanic research, further cemented by his Navy service and wanting to conquer his fears with the unknown. Cousteau urged Carpenter to join the U.S. Navy’s new SEALAB program overseen by Captain George F. Bond (known colloquially as ‘Papa Topside’). New diving techniques and developing new methods of scientific research at depths unobtainable before by humans was an exciting venture for Carpenter who was temporarily released from NASA to participate in SEALAB.

The SEALAB II Team, Carpenter is second from the left in the front row, Photo courtesy of U.S. Navy

He joined the second phase of the program, SEALAB II, and spent a total of 30 days in the Navy’s underwater habitat off the coast of California. Other divers spent less than 20 days underwater; perhaps this need to physically endure longer than others came from his rooted notion of beating the competition. It was a race he ran his whole life. The scientific venture was so captivating, President Lyndon Johnson and Carpenter spoke via telephone, but the breathing mixture of oxygen and helium turned Carpenter’s normally gruff voice into squeaky bleeps that we almost couldn’t tell what was being said. President Johnson might have thought he was talking to Mickey Mouse for all he knew. Carpenter captured public fascination again; this time in the dark depths of the ocean instead of the dark recesses of outer space.

During the preparation leading up to the venture though, Carpenter suffered injuries from an automobile accident, which not only cost him time with failed surgeries, but his flight status with NASA. He never flew into space again, just like Christopher Kraft Jr. had wanted less than three years prior.

‘For Spacious Skies’ closes after this final adventure. Children were grown and heading off to college, his long marriage to Rene ended in divorce and both were remarried years later. Carpenter’s body pushed beyond the limits of what was conceivable decades ago and so we know of an inevitable breakdown, but the mind persevered with the blazing spirit that he carried throughout life. He founded companies dedicated to oceanic research and became a private consultant to a variety of industries. He passed away on October 10, 2013 following a stroke and was memorialized by surviving family members, colleagues, and other astronauts, including his lifelong friend, John Glenn.

What makes ‘For Spacious Skies’ all the more appealing beyond telling the story of an American hero, was the emotional weight it carried with Carpenter always striving to gain his father’s attention and acceptance. Letters and correspondence between his mother and father illustrate the contentious times in his childhood. Toye constantly extolled the need for a father in a boy’s life and when the occasion rose for Marion to take on that duty, it was shirked, leaving Scott slighted and his mother furious. The need to feel accepted fueled Scott’s drive to beat the competition and be the best.

Scott Carpenter brought the right stuff to Mercury 7 and ‘For Spacious Skies’ is the right stuff for those who want to learn about an American icon. Not everyone can claim the title of both astronaut and aquanaut, but he did with his lifelong journey to know and overcome the unknown. 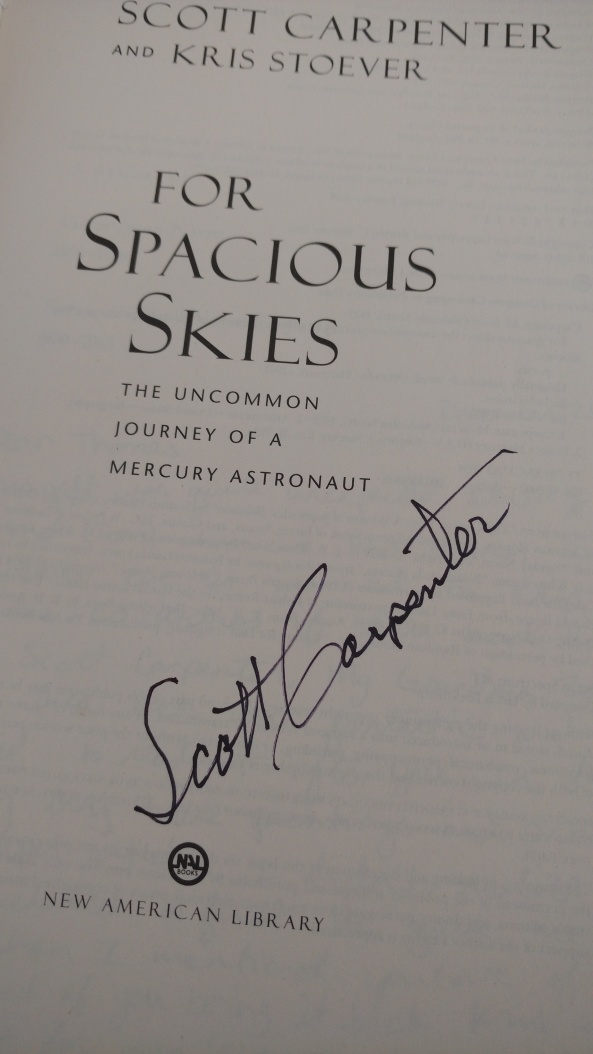 I loved this book so much. Even more when I discovered Carpenter’s signature on the title page. I’m 99.99% sure he signed it himself.