The federal government has an enormous repository of information (enormous may not be enough of an adjective). While the National Archives and Records Administration (NARA) contains millions of cubic feet of records, billions of logical data points, and hundreds of thousands of artifacts in collections from Presidential libraries and preservation offices, one of the most requested items are military records. Everyone from veterans, to researchers, historians, mortgage companies, law enforcement, and others look at military records for a wide range of reasons. Military records themselves contain a wealth of information detailing nearly every facet of a person’s time in the service. From their enlistment contract to their final discharge from the reserves, military service records are a critical link in a chain of information kept by the National Archives.

These records are formally known as Official Military Personnel Folders (OMPF) and they are carried by a veteran throughout their service. Each contain different forms that cover the enlistment process, promotions, transfers, awards, educational courses, and disciplinary actions. If you’ve been in the military, you’ll recognize form names like DD-4 (Enlistment Contract), DD-214 (Certificate of Release or Discharge from Active Duty), DD-215 (Correction to DD Form 214), DA-5016 (Chronological Statement of Retirement Points), and DD Form 256 (Discharge Certificate). These are crucial documents that a veteran needs upon separation from active duty in order to apply for many financial and medical benefits from the Veterans Administration (VA). On top of essential documents like these, the OMPF also contains information on education, transfers, awards general orders, appointments, and TDYs (temporary duty). These flesh out the fine details of a service member’s career and complete the larger picture. 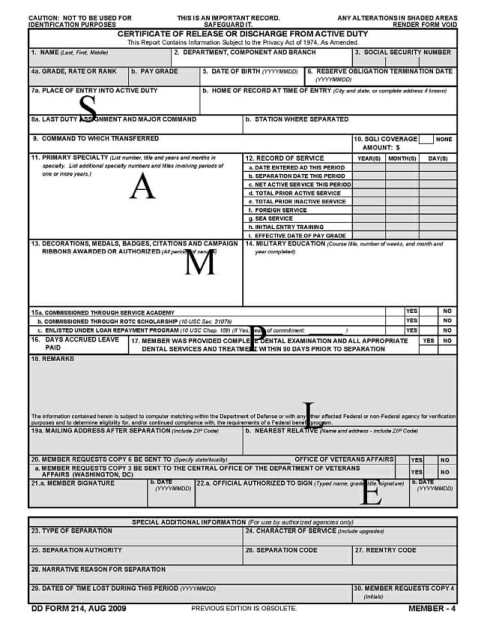 DD Form 214, Certificate of Release or Discharge from Active Duty. This is arguably the most important document that a service member will receive upon completion of their service (image courtesy of the Department of Defense)

Because OMPFs can have a massive amount of information, examining the signature DD Form 214 will provide the best overview of what people look for when researching military records. This is the capstone military document for a veteran. First, the form contains the basic personally identifiable information (PII), such as name, date of birth, social security number, home address, rank, and branch of service. The DD Form 214 won’t list every command or duty assignment, but it will mention the last one prior to a discharge or release from active duty. A primary specialty is the service member’s job (also called their Military Occupational Specialty, or MOS). Depending on the service branch, every MOS you’ve ever been assigned will be listed in that box also. The Record of Service is also important as well since years of active  duty and foreign service has a direct effect on what kinds of benefits one can receive from the VA. For all those Navy, Marine Corps, and Coast Guard veterans, Sea Service denotes the time deployed on a ship at sea.

Decorations and Awards is some of the most sought after information. It’s also the section that is subjected to more in-depth research in years following an individual’s discharge. This is due to the fact that the Department of Defense can issue orders or Congress can pass legislation retroactively authorizing the issuance of new or accompanying awards based on time, place, location, and purpose. For example, a U.S. Army veteran who served in Vietnam receives the Vietnam Service Medal, but they are additionally entitled to bronze service stars for time in campaigns, the Republic of Vietnam Campaign Medal w/1960 device, and the Republic of Vietnam Cross of Gallantry with Unit Palm Citation. Those two are foreign awards and not issued by the Department of Defense, but they are entitled to wear them as a U.S. Army veteran who served at least 1 day of active duty in the Republic of Vietnam. Conversely, a U.S. Marine Corps, Navy, and Air Force veteran doesn’t automatically receive those two awards, unless they were already issued at the time of service. Another example are World War II combat veterans. If a veteran received the Combat Infantryman Badge for ground combat action, they are automatically entitled to wear the Bronze Star Medal. Usually veterans request their awards for personal reasons, such as putting them on display or having them for a memorial service following their death.

Service members, especially officers, attend specialty schools and take correspondence courses to augment not only their personal education, but some courses are prerequisites for a new MOS or promotion. If a person ever takes courses like that, the DD Form 214 records every class and school they successfully complete. The Remarks section is primarily used as extra space in case the information is incomplete in its original box. Here you might see the decorations and awards information carry over, or an updated address, or something else.

Eight copies of a DD Form 214 are made; two are given to the veteran and the remainder split between the VA, DOD, the U.S. Department of Labor, and the veteran’s home state. On four of these copies is another crucial piece of information; the character of service and type of discharge. These two boxes can have arguably the most significant impact on a veteran’s life after they’ve left the service. The character of service describes the nature of their time in the military; whether or not they’ve done their job satisfactorily, have not committed any crimes, and have successfully fulfilled the duties of their station. If so, they receive an ‘Honorable’ or ‘Under Honorable Conditions’ characterization. Below this category is the ‘Other than Honorable’, ‘Bad Conduct’, and ‘Dishonorable’ discharge. These occur normally as the result of punitive action or a court martial as a result of a criminal offense. A person may also receive an ‘Uncharacterized, Entry Level Separation’ which means that they didn’t complete more than 180 days of active duty before they left (normally they left during basic training or had an underlying medical condition). Additionally, when a service member separates, they are either discharged, meaning they have no further obligation to the military, or they are released from active duty, indicating a transfer to a reserve or National Guard unit to serve a period in the reserves. Once that period is complete, then they are fully discharged from the reserves and the service branch.

Military records are not only filled with administrative information, but incredibly rich historical information when well researched. A soldier’s story fills in the board narrative of our nation’s history abroad and what they went through overseas. Researching military records both keeps our history alive and garners a greater appreciation for those individuals who willingly put themselves in harm’s way to ensure our way of life and liberty in our nation.

2 thoughts on “Going Through the Files: Researching Military Records”