‘The Spirit of Woman Power’

Every war has its battlefields; air, land, and sea (and space if it’s science fiction). Soldiers and sailors clash arms as armies and navies combat to seize the opportunity and win the day. Behind the front lines though, there’s another battlefield. Another less bloody, but equally critical to the military. The home front provides its nation’s military with every demand it makes. Essential resources, armaments, factory workers, and societal support can make or break an army. The Great War tested the economies of nearly every country on the globe and in the United States, a specific group dedicated itself to supporting the home front effort in every facet of the definition. Women’s committees were the backbone of local, regional, and national defense programs through their grassroots networking, training, overall production, and collaboration with federal agencies. A premiere group of specialized workers, the Women’s Committee on the Council on National Defense oversaw a multitude of defense projects during the war. The home front directed factory production, agricultural sustainability, and local community energies to the war effort in World War I.

Before the United States intervened in Europe, programs aimed at raising funds and providing goods for the Allied powers were in practice. Aid packages to Britain and France were common and provided essential resources such as food and fuel. By 1917, the U.S. became increasingly involved overseas, culminating in its war declaration in April 1917. Local and regional energies and dozens of civilian and government committees were formed to contribute to the war effort. This was done not only to compensate for any manufacturing shortfalls, but to bind the country in a common goal. Communities saw it as a point of patriotic pride by ingratiating themselves with home front activities. The Women’s Land Army of America placed thousands of volunteers on farms and ranches to compensate for the loss of labor. Thousands volunteered for the Red Cross and the Women’s Committee, whose primary goal was registering member’s skills and directing food donations.

The Women’s Committee worked in conjunction with the US Food Administration and its director, future U.S. President Herbert Hoover. Women’s Committee chapters operated locally, orchestrating food drives and agricultural practices in their community. Local food production was essential and securing enough for the armed services meant coming up with creative solutions at home that would not put additional pressure on the economy. One focus of the Women’s Committee was to educate children and participate in school activities. These primarily included teaching children how to start a local garden, run food drives and can food. Each of these taught children and their families how they could save and preserve their food supply. This allowed people to conserve and stretch their groceries further, thereby leading to less food consumption. Every change was done to increase their output capacity. 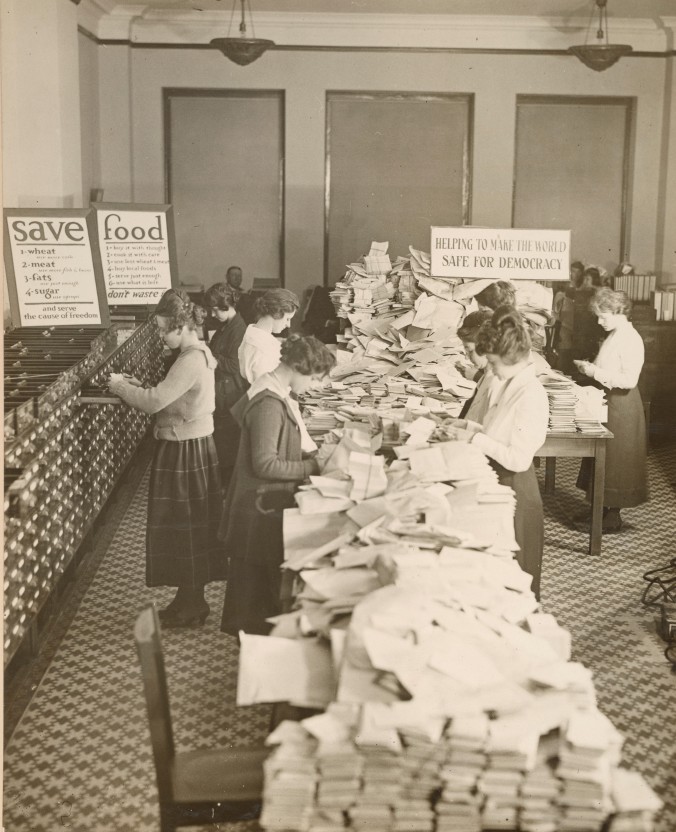 Women and children aid in getting food conservation pledges signed. View of the Food Conservation Commission office in New York where the 600,000 food pledges are being filed. Hundreds of women and children aided in getting signatures. The office was at 124 West 42nd Street (American Unofficial Collection of World War I Photographs, 1917 – 1918, Records of the War Department General and Special Staffs, 1860 – 1952, National Archives and Records Administration)

These interactions were not without some disagreements and compromises though. During the war, women’s suffrage activism was largely suspended in order to support the war effort; suffrage organizations who participated in home front work received widespread acclaim during the war, and that later played a critical role in passage of the 19th Amendment. Women’s suffrage activities might have lessened, but they did not postpone themselves outright. Pockets of suffragist groups still petitioned state and federal government, advocating for the right to vote.

President Woodrow Wilson stated that “it is not only an army we must shape and train, but also a nation.” Women’s organizations in World War I played a crucial role on the home front and integrated the war effort into every community and home.

“Will you help the Women of France? Save Wheat. They are struggling against starvation and trying to feed not only themselves and children- their husbands and sons who are fighting in the trenches.” (Records of the U.S. Food Administration, 1917-1920, World War I Posters, 1917 – 1919, National Archives and Records Administration)

2 thoughts on “The Spirit of Woman Power in WWI”